Exhaustive command line interface is a legacy part of Unix. Get yourself familiar with the philosophy of Unix.

The operating systems you should be running are GNU/Linux, which inherit from Unix and add a great deal of other features. Even if you are running Mac OS X, you are on a Unix-type OS, but you are tied into it more firmly. But you shouldn’t ever be using Windows, because Windows are evil and dumb. 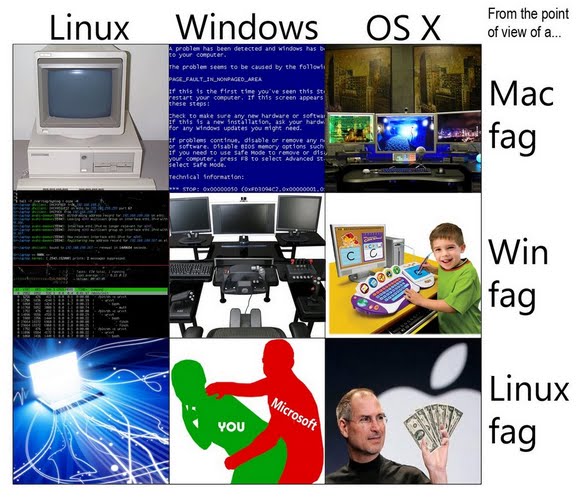 See why Linux is better.

So… Unix. Every Unix has a command line, a terminal console window (or no window) with a prompt, e.g. user@machine:/current/dir $, after which you type in commands. The $ usually denotes a regular-user terminal session, and if the prompt ends with #, the user is root (e.g. highest-permission super-admin).

The point of this command line is thus: You run a program with some space-separated arguments. You can pass the program some input stream of bytes (called standard input), and the program can output (e.g. print) some stream of bytes (called standard output). You can chain several commands with a pipe (| symbol), which means the standard output of the previous program is passed as standard input into the next.

In the above example, grep is the name of the first program, which is passed three arguments (-i for case-insensitive matches of the string error on any lines of /var/log/some-program.log file (some-program’s journal, diary). Normally, grep would output all the lines that match, but in our case, the output of grep is passed as input to the second program wc with the argument -l, which makes it count the number of lines (instead of words by default). 237 lines containing the word error, in this case.

You can always get the help on some program by typing man before, or --help after, its name. That is, man grep and wc --help, for example. The first will open grep’s user’s manual, the latter wc’s short help and usage.

Follow through with the tutorial on one of these sites:

Below is a great tool for dissecting and learning about Shell commands (besides using -h or man).

After you’re done, skim through these pages very briefly:

If you are feeling masochistic yet, dive into these (optional but benefiting) tutorials as well:

If you know the name of the program you need in order to solve your problem (let’s call it program) but you don’t know exactly how to use it, then type man program for the program’s manual or program --help for its short help.

If you don’t know what program you need to accomplish something, type apropos -s1 <keyword> for a proposal of suitable installed programs (from Section 1, Commands, and with <keyword> in its short description).